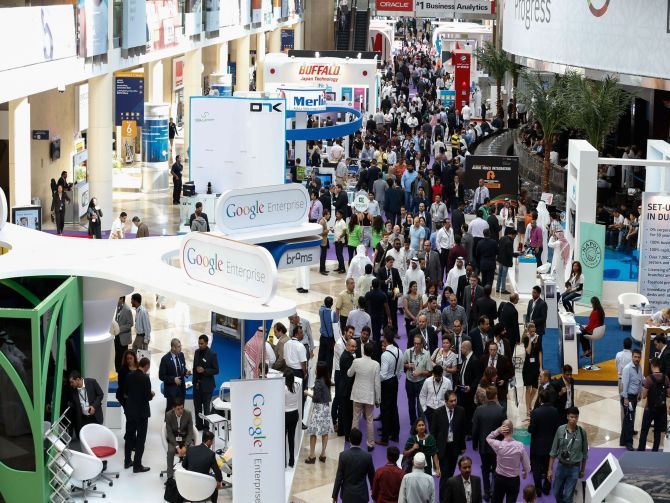 The second day of the GITEX Technology Week has ended and it has seen more announcements and new products being displayed than the previous day, with global giants like Booz Allen Hamilton and Microsoft getting in on the act, as well as displays by government agencies and the neighbouring city departments showcasing the advanced technology that they’ve developed to make the world a much easier world to connect and secure.

The Dubai government, through its subsidiary body – Dubai Smart Government Department, has initiated the MyID service. With this residents of Dubai need not have to register with government entities separately and have separate accounts for each one of them, with a single ID, the residents can access their relevant information through the desktop or with your smartphones. Several government entities are included and customers can register via electronic kiosks, affiliated centers of the government and even at the Dubai Mall.

The Abu Dhabi government services launched the “Abu Dhabi Services” platform – it is an app comprising of more than 1,110 governmental services that takes into account key smart services – education, immigration, residency, housing and property, employment among others. The purpose of this initiative to provide a single access point for all government related process making it cost less and more time efficient, which in turn will result in greater productivity for the people.

Microsoft has unveiled its large screen collaboration device, called Surface Hub, which will enable greater interaction for office and non- office activities with reduced obstruction in the transfer of crucial information. It comes in 55” and 84” with optically bounded displays capable of detecting 100 points of multi touch and three simultaneous pen inputs, dual facing 1080p front-facing video cameras, four-element microphone array, WI-fi, Bluetooth 4.0, NFC and a variety of ports for wired and wireless access.

The second has been a visually stimulating as well as intellectually informative day with several technology of the future being unveiled right before the eyes of the mesmerized audiences. It aslo saw great seminars and speakers such as Robert Scoble demystifying the future and letting it be accessible who desires it. The third is sure to have more in store the curious and the spectators alike. Tune in for a grand moment at GITEX 2015.