The International Film Festival of Kerala is an annual event that is held during the fag end of every year, and it galvanizes the entire film community here in India and especially Kerala. Internationally esteemed film historians, critics, actors and film makers coalesce here in the capital city of Trivandrum to watch a week’s worth of film selected from across the Globe and engage in stimulating discussions about the state of contemporary cinema as well as pay tribute to the those who’ve advanced the art of film-making in the past. 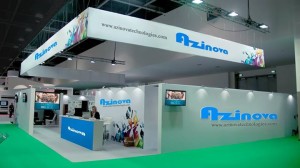 This event is enormous in size and the logistics and organisation, prior to, during and after it, is a hefty load to make sense of. In spite of the difficulty, Azinova Technologies have risen to the challenge and have been spearheading the entire software design and automation for the event for the past few years.

Not counting the year before, the software applications and website application design such as the log in and registration were done by Azinova Technologies and with each year we try to revamp the entire design to fit the changing times and the advances in technology.

During our one year’s absence, we have developed a more advanced system for the registration and automation for IFFK, which we implemented during the 20th IFFK this December. This year’s design is far more advanced than the previous versions and is capable of delivering unprecedented results in efficiency and speed.

This is possible because we have with us the most experienced of designers and staff, who have proven their worth in software development and design. Our team makes it a mission to make the software as lucid as possible and make it interactive for the user. The registration and access granting has been made seamless and fluid, eliminating the cumbersome process and transforming it into a satisfactory experience for everyone.

The accompanying mobile application is a cinephile’s best friend. It is streamlined to incorporate every facet of the events that occur during the 20th IFFK and make it accessible to anyone who has a smartphone in their pockets. The film schedule and exclusive details of the personalities visiting this year’s event are at your disposal whenever you want it, all you have to do is tap on your screen and information unfolds right in view.

Moreover, we are providing online chat and phone support to whoever that needs it. All their doubts and queries will be instantly cleared off and we will direct you to the next possible step to take to resolve their doubts if we were not able to provide a clear answer.

We have taken into account every single factor and component, and have left nothing to chance. We are also certain that throughout the length of the festival, our software and design will serve the purpose of every avid film-goer and the ordinary citizen alike.